The SdKfz 171 came about in response to the Soviet T-34, which the German's were facing on the Eastern Front from 1941 onward. So the German's anted a Tank which could counter the T-34 threat. In November of 1941, a team of designers, manufacturer's and serving officers from the German Army's Heereswaffenamt visited the 2nd Panzer Army to assess the T-34 first hand. After assessing the T-34, Daimler-Benz and Maschinenfabrik Augsburg (MAN) were tasked with designing a 30-ton Medium tank by April of 1942. The MAN was accepted in May of 1942 as it used an existing turret which had been designed by Rheinmettal-Borsig.
The Panther adopted many of the design features of the T-34, such as sloped armour and wide tracks. In September of 1942 the first prototype was tested and was immediately pressed into service. But despite delays in production due to a lack of manufacturing equipment for the hull, the first Panther's were rushed to the German Panzerwaffe in December of 1942, but the design was hampered by technical troubles. But despite these troubles the tank was successful, and was found to be in high demand for the fighting on the Eastern Front. The original production order of 250 Panther's a month was increased to 600 a month in January of 1943, which meant that production was given Daimler-Benz, Maschinenfabrik Niedersachsen-Hannover (MNH) and Henschel. But due to the Allied bombing offensive the required production figures were never met with only 6,000 being produced in total throughout the war. The Panther saw its combat debut at the Battle of Kursk in July-August 1943.
The Panther was powered by a 700hp Maybach V-12 HL230 P30 engine with a seven-speed AK 7-200 synchromesh gearbox designed by ZF, which had a governor fitted in 1943 to minimize engine failure (a problem the Panther was hampered with) by limiting the engine revolutions to 2500rpm and reducing the power to 600hp. This resulted in reducing the Panther's top speed from 55km/h (34mph) to 46km/h (28mph).
The Panther had a crew of five: Driver, Radio Operator, Gunner, Loader and Commander.
The Panther was armed with a semi-automatic 7.5cm (75mm) Rheinmetall-Borsig KwK (KampfwagenKanone) 42 main gun and could carry 79 rounds of ammunition which consisted of  Armour-Piercing Capped Ballistic Capped (APCBC), High Explosive (HE) and Armour-Piercing Composite Rigid (APCR). The KwK 42 was one of the most powerful guns of the war and was more successful at piercing enemy armour than the Tiger's 8.8cm (88mm).
The Panther had a frontal armour of 80mm thickness, which sloped at 55 degrees from the vertical which was of welded construction. The front of the turret had a 100mm cast mantlet. To keep weight at a minimum the sides of the Panther were only 40mm to 50mm thickness, which made the Panther vulnerable to attacks from the side.

And the references I'm working from. 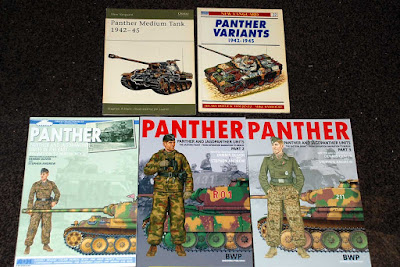 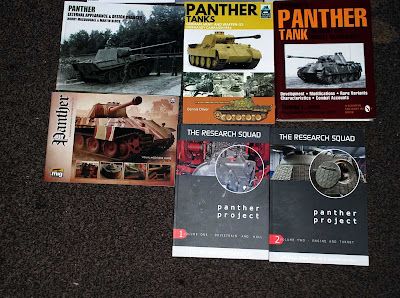