Finished this yesterday. The model depicts Avro Lancaster B.Mk.I RF128, which was built at Armstrong Whitworth Aircraft. RF128 was taken on strength by 424 (Tiger) Sqn of 6 (RCAF) Group Bomber Command. RF128 wears nose art painted by LAC Matthew C. Ferguson (who also painted nose art on other aircraft in the squadron) christened "Victorious Virgin". RF128 was flown by F/Lt. J.F. Thomas RCAF and crew, who carried out the squadron's 2000th operation on Heide Oil Refinery on March 20/21, 1945. So onto the model, I was going to do the bomb door's open, but the door retraction jacks snapped (this was the first time it happened), so decided to do the door's closed. I also scratchbuilt a camera frame to hold the F.24 camera in the nose. I also drilled out the windows in the escape hatches as Airfix mould them solid. I also drilled out the camera port under the forward fuselage, the escape hatches and camera port were both filled with PVA glue, which dried clear. I've also fitted the correct bomb aimer's blister with "Z" equipment as per images of the actual aircraft. Now on to the images. The white in the exhaust staining depicts Lead deposits 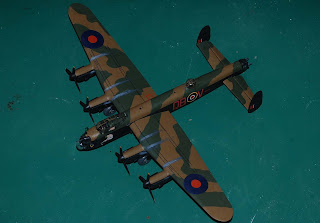 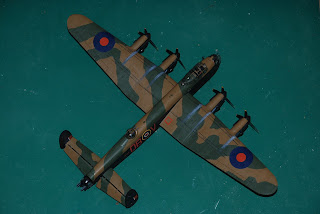 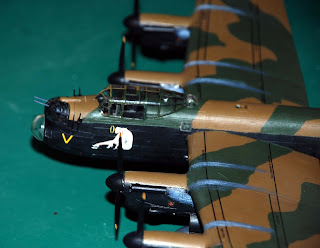